IT Chapter Two, adapted by Gary Dauberman from Stephen King’s novel, and directed by Andy Muschietti, is a less enjoyable film than Chapter One. The killer clown with the hazy, muddled origin has returned to terrorize the children of Derry. The loveable band of Losers, now adults sleepwalking through their lives, must return to Derry to put IT down for good. The film’s main problem is its expectations that we’ll be as invested in the main characters, now adults, as we were when they children, in the first film. The film makes little effort to earn any audience investment in its characters.

We learn next to nothing about the Losers’ lives as adults, and who they are now as people. We learn that Bill, played by a James McAvoy who seems bored with the movie he’s in, is married and terrible at writing endings for his book (spoiler: he overcomes this “conflict”). Eddie, played by James Ransone who is a perfect physical match for his younger self, is virtually the same person he was in the film, still a slew of neuroses, with an overbearing mother swapped out with an overbearing wife. Ben, played by Jay Ryan, is successful and soap opera hot. Beverly, played by Jessica Chastain, is a fashion designing icon who married a man who’s a stand-in for her abusive father. Stanley, played by Andy Bean, is married, likes puzzles, and is presumably still Jewish. Mike, played by Isaiah Mustafa, stayed in Derry and became the town’s micro-dosing loon. Arguably the only adult Loser’s life we really learn about is Richie’s.

Left: James Rasone. Right: Jack Dylan Grazer. Pretty sure one of these actors is just a CGI aged up, or aged down, version of the other.

Bill Hader plays the adult Richie, and Hader seems to be one of the few actors in this film who showed to do some actual “acting,” and not just get a paycheck. Richie is a famous standup comic, who has used his celebrity status and wealth to facilitate (implied, never shown) alcohol fueled binges of self-destruction. Plenty of critics have taken issue with specific revelations about Richie’s sexuality, and how they see it as both insulting to the Richie we loved from the first film, and to gay men. While I’d agree the idea that a famous gay man would still be closeted in this day and age seems a bit regressive, adult Richie is at least a fleshed-out character compared to the rest of the adult Losers, and we therefor care what happens to him. My main problem with the character reveal is who exactly Richie has been pining for his entire life. We see no hints of Richie’s affection for this character in the first film, or even in Chapter 2’s flashbacks, so the final reveal has all the weight of a red lead balloon. 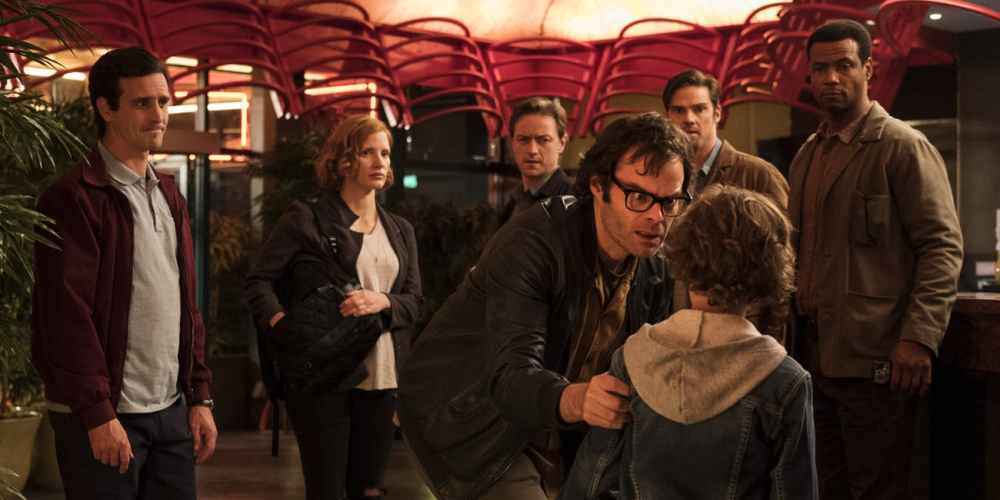 The fact that most of the Losers are just cyphers of their younger selves makes their personal conflicts feel repetitive to the first film, leaving them stagnant. Derry is a town filled with scumbags and apathetic adults, and we care little about the adult Losers. The audience find themselves not really caring, one way or the other, whether or not the Losers defeat IT. We’d almost root for IT, but the delightfully creepy Clown/space alien thing is also underserved by the film.

Structurally, the film gets in its own way by trying to fit in too much. It becomes an overlong, tangled mess of stop-start pacing. The opening scene, which has been criticized for its portrayal of a hate crime, reestablishes the dual threats of Derry and Pennywise. After this crime, Mike calls the Losers back to Derry to keep their promise to fight the monster should it resurface. The scene of their reunion at a Chinese restaurant is one of the few scenes containing any organic interaction between these characters. For a brief moment, we almost believe these are real people who are really friends. For most of the rest of the film, the character interactions are overwrought and overdone, making it hard not to focus on the status of the start-studded cast playing this group of fan favorite characters. The restaurant scene is also about the last time the film has any sense of tension, or that Pennywise feels like a genuine threat.

The middle portion of the film is filled with fan service moments that drag the story’s momentum to a near standstill. The kid Losers are back! Creepily de-aged with CGI. The sequences with the kids are mostly filler. As we see the kids have different confrontations with Pennywise than the ones we saw in the first film, but nothing new is revealed about the characters, nor the creature. The only flashback sequences that add to the characters’ backstories are those with Richie (revealing his struggle to be out and proud), and Eddie. In a sequence revisiting Main Street Derry’s local pharmacy, we see the origin point of adult Eddie’s inability to overcome his own fear that will be pivotal to the Losers’ present struggle with Pennywise. Eddie is lured by what seem to be his mother’s calls for help into the basement of the pharmacy, where he finds her strapped upright to a medical table. The leper who attacked Eddie in the first film, reappears, and Eddie ends up running away from the creature rather than take a stand and try to save his mother. The scene establishes Eddie’s central conflict of struggling to overcome his fear, and also adds a weird element of psycho-sexual bondage with his mother, that he clearly transferred to his wife. Unfortunately, this secondary character thread is unexplored. Presumably, because that would have been interesting, and if there’s anything this film refuses to be, it’s interesting.

Bill Skarsgard’s joyously perverse clown is largely wasted. While Tim Curry’s Pennywise had his moments of terror, Curry largely came across as a calculating, psychopath with a clinical understanding of human behavior. Regardless of how large the teeth prosthesis Curry wore, he was always just an effective actor in a clown suit. Skarsgard’s Pennywise feels very alien. IT does not fully understand human nature and interactions, so ITs mimicry of humans is always a little off, and easily falls apart. When Pennywise’s crudely constructed human mask crumbles, the true cosmic monster lashes out like a petulant child after being called out on a mistake (ala Trump Tweetstorms). Skarsgård shines in the present-day scenes of Pennywise stalking and killing the children of Derry, and I would have gladly watched a film focusing solely on him.

Pennywise floats away to find a better movie to star in.

The final conflict between the Losers and Pennywise plays out largely as it did in Stephen King’s novel. We get plenty of swanky special effects and nightmarish sequences, and we see the Losers finally triumph over their inner demons. Ben and Beverly finally kiss! (Snoooore). Eddie finds his courage. Richie…cries a lot. Mike admits he micro-dosed mostly because he liked it. Stanley’s suicide was actually courageous and necessary, or something. Bill realizes he wasn’t to blame for Georgie’s death. We learn in the final fifteen minutes of the film that he was playing sick the day Georgie died, to avoid spending time with his brother. This final reveal would have been interesting and added some much-needed depth to McAvoy’s performance of Bill, if it had been revealed earlier in the film so we’d had time to give a shit.

In the end (not really a spoiler), the Losers triumph by dispatching the monster. Yay! Conflict resolved: roll credits. You’d think, but no. In what seems to be a requirement for franchise blockbusters, the film drags on long after it should with endless goodbyes and needless character check-ins. Witness the glory of the kid Losers bicycling together one last time! Marvel at the filmmakers’ ability to interweave the voices of the child and adult actors together into one voiceover. Thrill at the wonderful futures our favorite characters will lead. Richie takes up woodcarving! Ben and Beverly casually enjoy yachting! Mike discovers couch surfing! Bill finally writes a good ending for a book! Shame the film’s writers and director couldn’t have followed Bill’s example, and known when to end the film.

It Chapter Two is currently showing in cinemas.

This is a text widget. You can use text widgets to display text, links, images, HTML, or a combination of these. Edit all of these widgets in the Customizer Widget section.