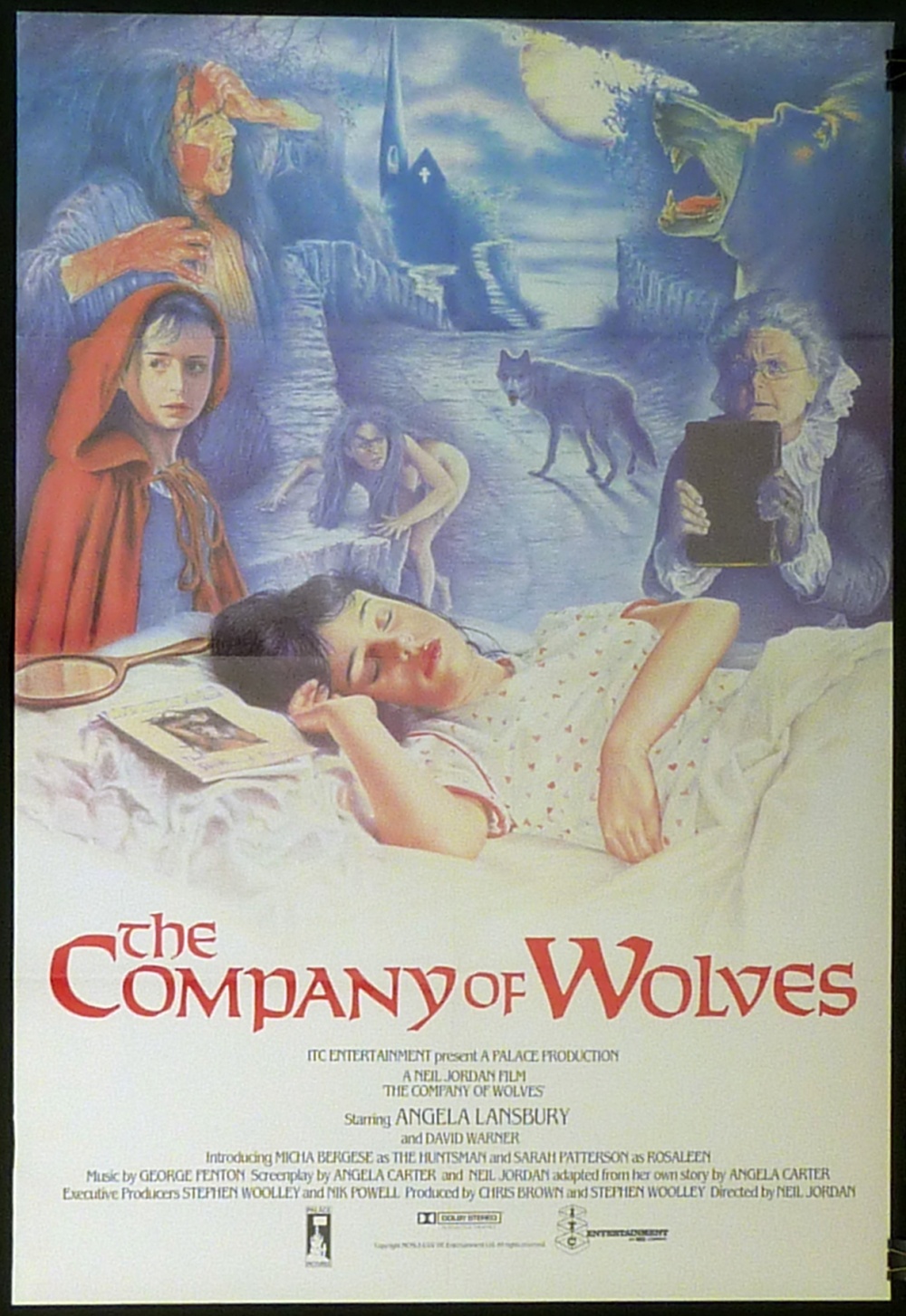 The film begins in the modern English countryside. Rosaleen, a teenaged girl played by Sarah Patterson, has locked herself away in her room for most of the summer. She drifts into a dream of her older sister, Alice, being chased through the woods filled with oversized, hostile children’s toys. In the dream, both girls wear flowing, lacey white nightgowns. The images have a dreamy haziness reminiscent of films like The Labyrinth (1986). The sister is beset by a pack of red-eyed wolves who fall upon her with fanged, slathering jaws and kill her.

Most of the film’s action takes place in the dream, around an English village in an unspecified time period, hundreds of years past. The villagers eke out a meager existence as farmers and hunters. Occasional modern-day anachronisms appear, such as the devil himself (played by Terrence Stamp), pulling up in a white limousine. These temporal intrusions do not phase the villagers. The film has a gothic, magical realist style that readers of Angela Carter’s works will find familiar.

After the shock of Rosaleen’s death, her parents send her away to spend some time with her no-nonsense Granny, played by Angela Lansbury of Murder She Wrote fame. To entertain her granddaughter, and impart important moral lessons and warnings, Granny tells her stories and allegories involving dangerous wolves. The wolves of these stories are often disguised as dangerous men. Granny seeks to warn Rosaleen of the many dangers she’ll face from inside and outside the village from such wolves and men. The granny claims all of these stories are true, as do the other storytellers in the film. All of the stories are told by women, but each woman tells their stories for different purposes. The film is told as a teenage girl’s dream of the telling of stories, and the significance of not just the stories themselves, but the roles stories have in shaping our worldview, and the differing reasons why, and ways of, telling stories.

Red cape in a wolf-infested forrest? Granny might as well be knitting a death shroud.

The film’s focuses on women and the stories women tell other women and their daughters. Most of the stories focus on heroines navigating a world of savage, lustful beasts that are men, and men that are beasts. Granny begins her first story to Rosaleen with the following exchange:

“Your poor only sister, alone in the wood with no one to save her,” says Granny.

“Why couldn’t she save herself?” Rosaleen asks.

Granny’s warning is a repeated refrain through many of the stories told to Rosaleen. She has entered her sexual maturity. The men and teenage boys of the village have started to notice and leer lustfully at her. Granny and Rosaleen’s mother’s stories warn of a world filled with dangers, of predators on four legs and two legs. She is repeatedly admonished, when going through the woods, to stick to the safety of the path, but Rosaleen is curious and aroused by the dangers and the adventures possible off the beaten path.

The film uses many fleshy and bloody symbols and images representing fertility, femininity, masculinity, and sexuality. The shiny skin of a plump red apple hides a core filled with worms. An abandoned bird’s nest is filled with lipsticks, mirrors, and eggs that crack open to reveal figurines of human fetuses. Love potions put hair on your chest but open you up to the maliciousness of the natural world. Rosaleen, in the bright red shawl her granny has made her, is an obvious subversion of Red Riding Hood. And the worse kind of wolves, like the worst kind of men, are also hairy on the inside.

Granny tells the story of one such man who is hairy on the outside and the inside is named only Young Groom. Young Groom is played by the star of a number of Neil Jordan films, Stephen Rea. Men like Young Groom are never to be trusted, and you know not to trust them because they have eyebrows that meet in the middle. Young Groom is a wolf hiding in a man’s body. On his wedding night, a night with a full moon, his Young Bride asks him to make love to her. The Young Groom’s sexual passions give way to his wolf hungers. Resisting his transformation into the wolf, he excuses himself from the cottage to collect water and, giving in to the transformation, runs off with a pack of wolves waiting for him outside.

Years later, the Young Bride is young no longer. She remarries and has three children with her new husband. Her wedded life is not the romantic adventure she envisioned when younger. Her days are consumed with grueling, tedious domestic work and the constant presence of mewling children. On a night when her husband is away, her first husband returns. He’s been living rough, his hair cascades down his shoulders and his clothes are in tatters. He pushes his way into the cottage uninvited, sits at the table, and demands food. When he sees the crying children, he angers and accuses Young Bride of adultery. He peels off his face and slowly transforms into the wolf. The transformation is detailed and gruesome, achieved effectively with the use of practical effects. The wolf attacks the Young Bride, but she is saved when her husband returns and lops off the wolf’s head with an ax. The head flies through the air and lands with a splash into a milk bucket. The milk turns red and the head that floats to the surface is human once again.  The wife is overcome by the death of the only man she truly loved and cries out. Thinking his wife is being irrationally emotional, her husband gives her a hard slap.

“I’d never let a man strike me,” says Rosaleen when Granny’s story is over.

“They’re (men) nice as pie until they’ve had their way with you, but once the bloom is gone, the beast comes out,” Granny tells her.

Granny’s meaning is clear. All men are beasts, and if Rosaleen wants to avoid the beastly violence of men, she must avoid all men. Rosaleen’s mother, played by Tusse Silberg views the world differently than Granny. She tells Rosaleen that the beast in men “meets its match in women, too.” These conflicting world views confuse Rosaleen. She does not know how she is meant to interact with the men and boys who express interest in her. Her confusion is compounded by her father’s, played by David Warner, argument that there is nothing unnatural or wrong with a girl of Rosaleen’s age spending time in the woods with boys.

The Company of Wolves can be seen as a feminine companion to David Lynch’s Eraserhead (1977). Both films address anxieties young people face as they mature into adulthood. Both films explore young people’s fears about the uncertainties surrounding sex acts, childbirth, parenting, and the potential death of one’s child. Jordan and Carter’s film argues that most of these fears in young people are unnecessarily fomented by adults seeking to protect their children. 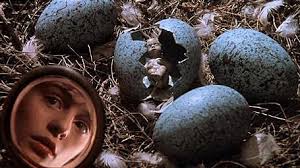 The film concludes with a revamped retelling of the Red Riding Hood story. In this version of the story, the Huntsman, played by Micha Bergese, one of the type of men Granny warned Rosaleen about. His eyebrows meet in the middle and he definitely has hair growing on the inside. Rosaleen and the Huntsman meet when Rosaleen strays from the path as she walks through the woods to her Granny’s house. The Huntsman makes a bet with her that he can reach Granny’s house before her. If she should win, he offers to reward her with whatever her heart desires. If the Huntsman wins, he wants a kiss as his reward. Rosaleen is wary of the Huntsman, but also attracted to him, so she agrees.

On arriving at the cottage, Rosaleen discovers the Huntsman has beaten her there and her Granny is nowhere to be seen. She spots a lock of her Granny’s hair burning in the fireplace. Her suspicions are confirmed. The Huntsman is both a man and a wolf. He lives in the world of men and in the world of wolves, belonging to neither. The Huntsman attacks her, his manly desire for her kiss giving way to a wolfen hunger for her flesh. She fends him off with a shot from his own hunting rifle. Fully transformed into a wolf, he whimpers at his gunshot wound. At the sound of his cries the rest of his pack outside abandon him. To comfort him, she tells him a story about wounded wolf.

Rosaleen tells a story of a female wolf journeying up from her home underground to visit the village above. She is looking to make a connection with the humans she’s spied in the past but is attacked immediately and shot. The wolf runs into the woods until she reaches a church. The priest comes out to find a naked, wounded girl. He bandages her wound, showing her kindness despite saying he doesn’t know whether she is an innocent young girl or a demon. The wolf girl wanders the woods for a time, but never finds a place to belong. Restored to her wolf form, she sneaks into the village and returns below to the world from whence she came.

The worst men are hairy on the inside.

Fearing the worst has happened to Rosaleen her parents lead an armed militia of villagers to Granny’s cabin, where they burst in. They do not find their innocent young daughter there. Instead, they find a proud female wolf wearing their daughter’s crucifix around her neck. The wolf breaks through a window to escape and joins a pack of wolves waiting in the woods nearby. The pack runs in wild abandon, tearing through the woods, through decaying buildings, into the real world of the still dreaming modern-day Rosaleen. She wakes with a scream as the wolf Rosaleen bursts out from her mirror, her open jaws aimed at her throat. If you take one lesson from Jordan and Carter’s The Company of Wolves, it should be to give your daughters a little latitude to forge their own paths unless you want them to run wild with the wolves.

The Company of Wolves is now available on HBO GO.

This is a text widget. You can use text widgets to display text, links, images, HTML, or a combination of these. Edit all of these widgets in the Customizer Widget section.